Kamala Harris represents an immigrant's dream for their posterity -- that their children will realize the dreams that even they may not live to see. A second generation immigrant, I recognize the roots of the Black Diaspora embedded in the persistence, competitiveness, and optimism of sociopolitical mobility. In her sits the paradoxes of assimilation and systemic racism. At once, she is an insider and an outsider to her intersected ethnoracial communities of race, ethnicity, nation, and religion; a pride and warning in flying so close to the sun; and the center and bridge of complex families and social networks.

The coming years will reveal more of the nuances of her history. My favorite revelation so far is that of @archivistchris, who posted a picture of a young adult VP Kamala Harris posed with a tall box cut softened with the curls of a cultures interwoven into the scalp. In the photo, her eyes are fixed to a horizon that she gazes at with her chin raised. She is not looking into the future; she is looking up. 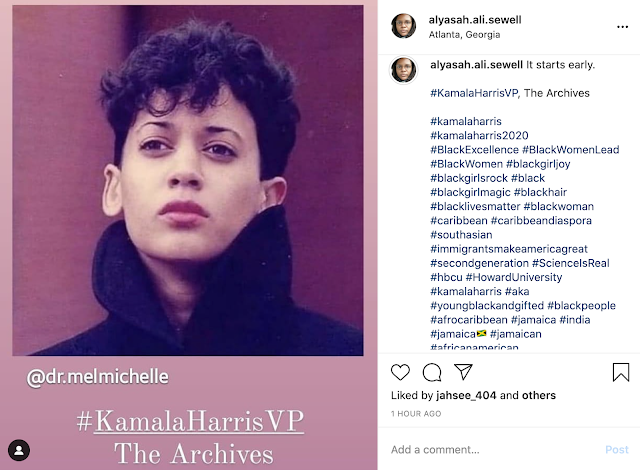 Kamala Harris has a legacy -- I am sure you can dig up her track record online. However, I might offer that her legacy has just begun its run. In her #Election2020 speech on Nov 7th, she called into the room Black women from their seeds. Mary J. Blige, already a cultural icon, captures the highlights of the Black music cultural scene that greeted her as she came of age. VP Harris called into the room the political economic power of the Black Mecca. On one hand, 2018 Gubernatorial-candidate Stacey Abrams blazed a path that cut through the chokehold of voter suppression after a heartbreaking conclusion to a campaign ending with a margin not much larger than that which will seal Georgia's first Democratic electoral vote in 28 years. On the other hand, Mayor Keisha Lance-Bottom's City of Atlanta and its suburbs delivered the final blows that have drawn the eye of the nation as a pivotal place to flip the Senate. 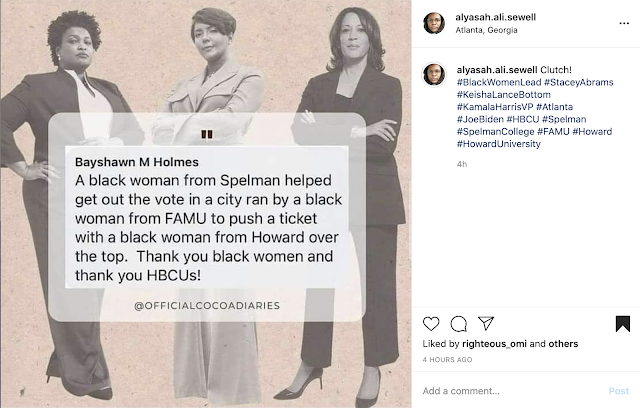 I feel a certain warmth emanating from a picture floating of these three icons of Black Woman Magic, focusing on the shared socialization and professionalization of historically-black colleges of universities. These stances are not just that of commanding elegance, but also of defiant excellence. However, if you really want to understand the fundamental undercurrents of this moments for Black Americans, you need only to train our eye back two decades, when the transformative hand of Mayor Shirley Franklin -- the first Black woman mayor of a major Southern city led this same city from the brinks of bankruptcy in the wake of 9/11. Mayor Franklin, born in Philadelphia -- the city that sealed the #BidenHarris2020 bid, also graduated with a master's degree in the same department that housed W. E. B. Du Bois as he conducted the seminal study that birthed modern day Sociology -- The Philadelphia Negro.

Kamala Harris brings into the dreams of stories that are foundational to racial capitalist colony -- that is, a nation-state that has turned the very idea of immigrant into both a curse-word and a promise. It is not possible to find a single moment in VP Harris's life that "made" her -- that's how intersectional power works. Her transformative horizons cannot be dissected into any of the sums of her part. And that, is what the vision of a second generation immigrant is -- a fusion of social experiences, histories, and trajectories that offer more imagination than what can be found in an archive created by a society that is limited by its own vision of success.

VP Kamala Harris walks in the footprints of Black diaspora political legacies. She is the granddaughter of Marcus Garvey.

As part of the Jamaican diaspora, I claim Kamala Harris as my ancestral sister. My father was born to the Asher and (American) Sewell families in Kingston, Jamaica -- the same birthplace of Marcus Garvey. After years of being my after-school companion, we buried "Miss Olive" in the family home in the hills of Manchioneal; she carries the same look and stance of Kamala's grandmother, Miss Iris.

I also claim Kamala Harris as my ancestral cousin. Garvey's immigrant story, like the story of many in the Jamaican Diaspora, pivoted when he left his home at the age of 23 and headed to Puerto Límon, Costa Rica. He went there to stay with his maternal aunt, referred to work at the UFC as a timekeeper by his maternal uncle. He would raise the agitation of locals after setting up La Nacíon, a daily bilingual newspaper, incensed by the inequitable treatment of manual laborers in the area -- many of them of African descent. My grandfather would become one of the stewards of the Límon chapters of the first international chapters of U.N.I.A., among the more radical civil rights organizations of the early 20th century. Límon also bore the paternal grandmother of Epsy Campbell Barr, Costa Rica's first Black woman Vice President. Campbell Barr is the first Black woman Vice President elected to office in the Americas (Viola Burnham of British Guiana was appointed to VP in 1985). You can see her here in a white suit -- just as the one Kamala Harris rolled out in her first speech as Vice President-elect. 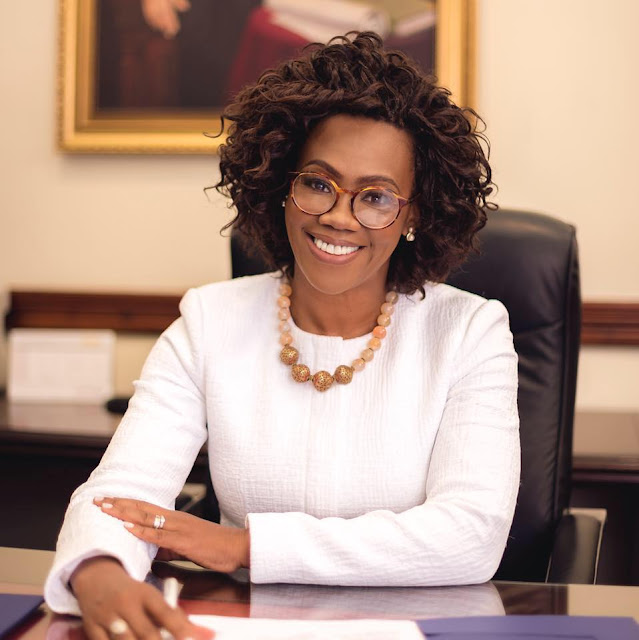 Kamala Harris is also my ancestral aunt.  My mother was born in Límon, Costa Rica to parents who were tightly clasped in the same British colonialism that set the context for Harris's mother to leave India. My maternal grandfather came to Límon as a seasonal laborer on the Panama Canal and a fisherman on the Caribbean coast. He would ascend to own income-generating property while also working as an accountant in the city -- still seeking work on the Canal when needed and available. My grandmother, meanwhile, was a fourth generation descendant of enslaved Africans emancipated in 1823 by the Costa Rican government. They were given cacao seeds from the plantations they worked and agricultural land in the regions of Puerto Límon a decade before Britain abolished slavery in its colonies. My mother would grow up in a racially segregated area of Límon, with a literal railroad track that separated her neighborhood from those of White Costa Ricans -- just over the tracks was the school that would create a pipeline for my grandmother's 6 children when she was hired to be a domestic worker in New Jersey after my grandfather died suddenly of a heart attack when my mother was 9 years of age.

46th VP Kamala Harris is a story of complexities and nuances of the transatlantic slave trade. The traditional story of movement told in the U.S. is unidimensional -- from there to here. Yet, this way of thinking about immigration reflects the racial colonial capitalism that steers the U.S. empire. Once immigrants, this country now curses immigrants. The twist that Kamala's ethnic story paints come from empire hopping. She is the daughter of immigrants from lands that were colonized by Britain. So much more rests in Kamala's Black diaspora than is appreciated by the American soundbites that mesh her readily apparent parental ethnicities into a series of hyphens and slashes. 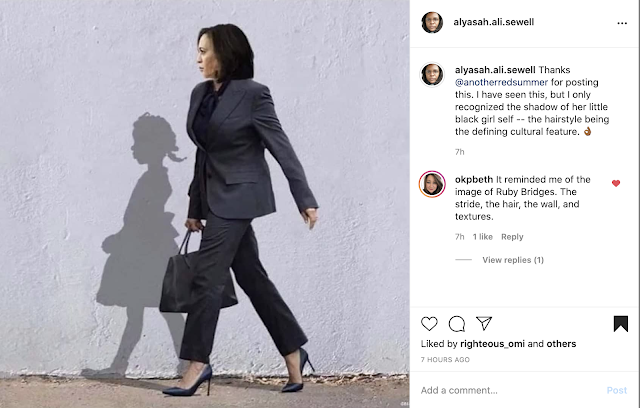 In her, I see the clearest context to understand my own childhood household. Black girls like Kamala and I are not the history of global racial colonialism beyond a chapter or a month. My travels through the globe to connect with my family have sent me back to Kingston and Límon and onwards to Hamburg (Germany), Canada, the Bahamas, St. Croix, and Puerto Rico. Those travels eventually set me back into the blocks and zipcodes; towns and cities; and backways and beaches of the only place I have ever felt home, to fight for its national and local horizons that have always been an immigrant's home.

And, for the next 100 days or so, I will play with rewriting those visions my parents had of me, and the ones I had of myself, the ones that others reflected in me. I am sure that Madame Vice President Kamala Harris is also doing so. And, hopefully, you will do so too.